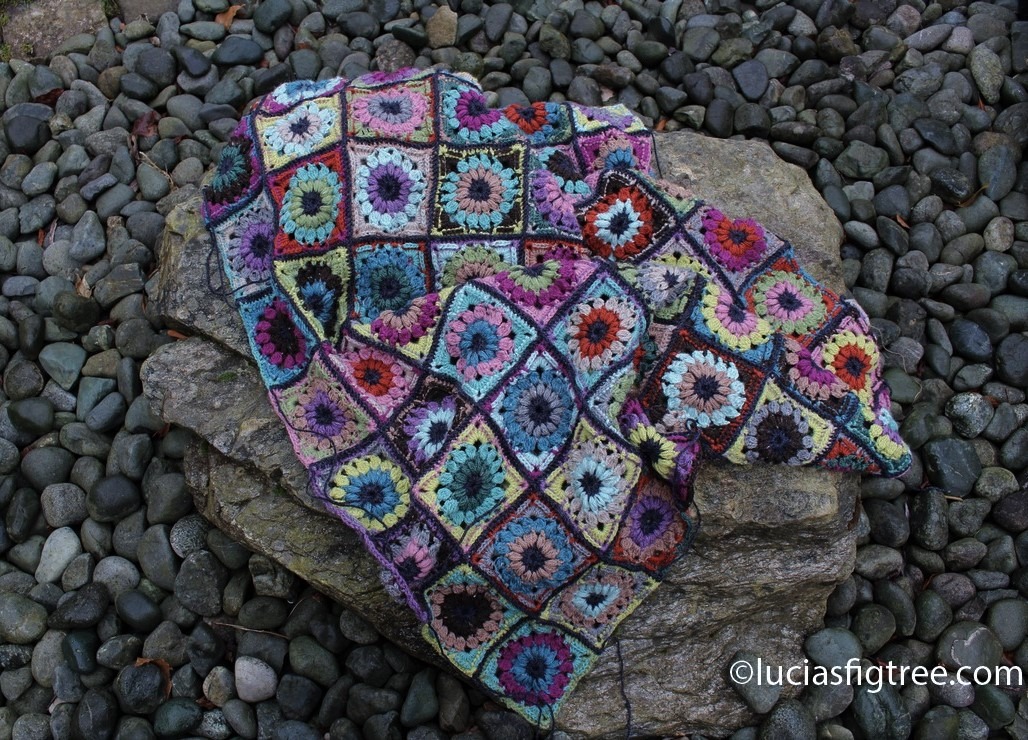 More about the Emily…

I thought I’d write an update on the blanket I’m currently making. I must say it has not been plain sailing, maybe it is because the task to transform an idea into reality, especially if it is something that you are passionate about, is never easy.

I had to make some adjustments as the tomato was too bright and highjacked the colors combination.

In the picture you can see why, it is  out of focus in purpose  so you can see the ‘tomato effect’.

I substituted the bright hue with a tweedy chocolate which works much better and, consequently, I had to do a fair bit of ‘frogging.’ Chocolate browns, pale greens, dusty blues and some copper, they are all part of the interior of the parsonage and the surrounding area. One of the rooms I liked most was the hall. I remember reading Ellen Nussey’s ‘Reminiscences’, how “…the hall floor and stairs were done with sandstone, always beautifully clean, as was everything about the house…”  and she describes the walls as being “not papered but stained in a pretty dove-coloured tint’.  The restorations of the house revealed that it was more of a pale blue-gray that had been introduced and it is what you can see today.

Next was the pattern for the actual square, again several attempts and LOADS of samples later I came up with something I quite liked. The first thing I wanted to do is for the square to have a rugged feel of the Yorkshire landscape and outdoor clothing. My attention was drawn by some of the  original garments wore by the Brontës that I had seen displayed in the museum.

The reason why so many sisters personal items, utensils, and clothes which in normal circumstances would have disappeared have been preserved is that a cult and interest for everything that involved the sisters became quite prominent very soon after they died. Fuelled not only by the extraordinary success of their novels but also by the publication of the first biography of Charlotte Brontë written by Mrs.Gaskell’s in 1857 just a few years after the death of the sisters.

It wasn’t only the sisters but it was also theirs surrounding that became of interest. Virgina Woolf wrote in 1904 following a visit to the parsonage:”Haworth expresses the Brontës; the Brontës express Haworth; they fit like a snail to its shell.”
I digress…
Back to the blanket. As I said I wanted to have a feeling for the landscape and the clothes, but also I wanted to have some lacy aspect also to celebrate the very popular at the time, Irish crochet that adorned not only their clothes but also their homes.

On the subject of  Irish lace, I also got inspired by some amazing examples I saw in the archive of the Knitting and Crochet Guild on the Friday when I visited Stylecraft.

Irish lace became popular around 1830 when an English businessman, Charles Walker,  brought several lacemakers to teach the craft in Limerick, Ireland, drawn to the area by the availability of cheap, skilled female labor. Walker’s business thrived: within a few short years his lace factories employed almost 2,000 women fuelled by the increasing demand.

The hues of my blanket  are quite demure, as nothing of Emily makes me think of frivolity, the yarn is tweedy, warm and quite substantial, like their clothes made for long walks on the moors but also some femininity, hence the lacy feeling of the pattern, with a round 3D center and  lighter surroundings.

Still, on the lacy theme, I was going to use a flat braid to join the squares, but it didn’t work for me at all, the squares became quite misshapen and had to be unraveled once again.

Then I thought about something  curious I saw at the museum: a letter which was written by Anne Brontë to Ellen Nussey, actually, quite poignantly it was going to be her last letter as Anne was terminally ill, the note was a beautiful example of cross-writing, the letter is written with lines both horizontally and vertically, a common practice to save on postal costs.

The pen marks and pattern of the letter inspired my joining method: mixed charcoal, a beautiful organic color, became the chosen hue and a crisscrossed pattern to join the square.

In the next few days I am going to tackle the border..I have a couple of options and i will have a try and see which one look the best.

Until the next, thank you for reading!